Field School Friday will be a weekly feature on the MAS Thunder Bay blog. We will feature field schools from around the world to help promote archaeology programs and present students with more educational options.This Field School Friday was submitted for Jordan Jensen, a Central Michigan University student that is currently participating in the field school at Draper Park.

Located in Port Huron, Michigan, under the Blue Water Bridge, students from St. Clair Community College are working to discover the prehistoric past of the area.

Excavations were first conducted in the 1970’s where thousands of artifacts were collected and recorded. These artifacts were tested to be 1300 years old, putting the site around 700 A.D. The site was then closed until spring 2013 when news spread of possible construction on the site which would destroy any remaining artifacts. Last summer students opened the site again and begin to pull up an abundance of artifacts. 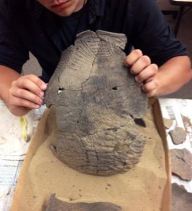 The site itself is believed to be a prehistoric fishing camp used by the Native Americans of that time. Many of the artifacts include net-weights, pottery, animal bones, and flint (flakes and tools). The site is once again open to students and volunteers until mid July. This is the last year the site will be open so we are allowing anyone who would like to dig into the fascinating world of archaeology to join us. Archaeologists are there from 8-4:30, Monday to Friday.

Any other questions can be answered by messaging their Facebook page at Draper Park Archaeological Field School (https://www.facebook.com/DraperParkArchaeologicalFieldSchool2013).

The Besser Museum of Northeastern Michigan in Alpena, Michigan was established in 1966. Since then, they have increased their collection with focuses on art, history and science. The museum’s highlights include a historical village, fossil park, Foucault’s pendulum, art galleries and wildlife exhibits. Furthermore, the Besser has a stunning archaeological collection.

The Haltiner Archaeology Collection is housed at the museum and contains about 10,000 artifacts from Michigan’s past. There are also artifacts from Michigan’s Paleoindians. One of the highlights of the Besser’s collection is the Naub-cow-zo-win Discs. These rare shale discs are prehistoric and as unique as they are mysterious. (Check out MAS: Thunder Bay’s previous blog post about the Naub-cow-zo-win Discs at https://masthunderbay.wordpress.com/2014/06/06/the-naub-cow-zo-win-discs-of-northern-michigan/)

This semester, an intern from Central Michigan University is assisting the archaeology department with their collection. MAS Thunder Bay hopes to hear more exciting things from her as her work continues!

Field School Friday will be a weekly feature on the MAS Thunder Bay blog. We will feature field schools from around the world to help promote archaeology programs and present students with more educational options.

Location: Just outside of Orange, Virginia 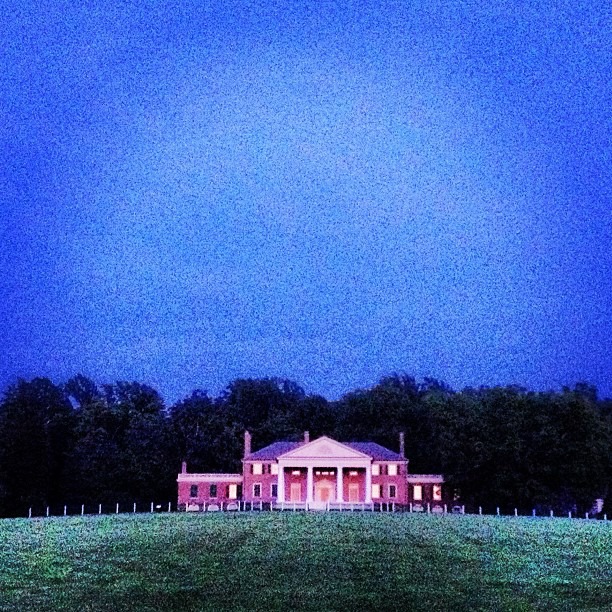 James Madison’s Montpelier is a historic estate that once was the home of President James Madison. While the mansion is not a site to be missed, there is an incredible amount of archaeology occuring across the property. The Montpelier property was also the location of Madison’s boyhood home, Mount Pleasant, encampments during the Civil War and prehistoric activity.

After you have successfully completed the field school at Montpelier, you will be eligible to remain on as an intern. Be aware that these spots are highly competitive.

For more information on the field school at Montpelier, visit http://www.montpelier.org/research-and-collections/archaeology/archaeology-programs/archeology-field-schools.

Have you ever wondered what exactly is below the waters of our Great Lakes? Drowned forests are important clues to the physical world of the past and Northern Michigan is lucky enough to have some great examples.

Those that love history and archaeology know of Michigan’s prehistoric past. We have glaciers to thank for carving out our Great Lakes over 15,000 years ago. Paleoindians have left ample evidence of their presence here in the years following the recession of the glaciers. But even for the most devote historians and archaeologists, it’s still hard to imagine Michigan thousands of years ago. The landscape then is not what we see today out our backdoor.

Landscape archaeology is a technique that enables archaeologists to better learn about past surroundings and how people interacted with them. It has been critiqued for being too focused on the environment rather than the environment-human interaction. But it does at least address the critical need for archaeologists to take a holistic approach to understanding the lives of the people they study, including the physical world they lived in.

Two drowned forests in Northern Michigan are the Lexington Forest Site and the Thunder Bay Forest Site. Samples from both sites date the trees to about 7,000-8,000 years before present. The preservation present is amazing. Some trees still have moss clinging to their bark. 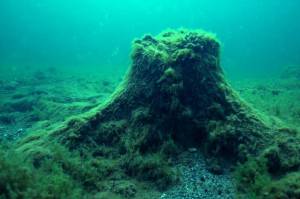 This stump has been named Monarch. (Photo Credit: NOF)

The Thunder Bay Forest site was discovered in 2009 by Nobel Odyssey Sea Cadet divers as they were diving on Scanlon’s Barge, a wreck in Thunder Bay just off of North Shore. They did a preliminary investigation that revealed 19 in situ stumps.

Research continues to try to learn if there is evidence of interactions between prehistoric peoples and the forests that now lie at the bottom of Lake Huron. Fore more information on submerged forests and more exciting underwater research, visit http://www.nobleodyssey.org. 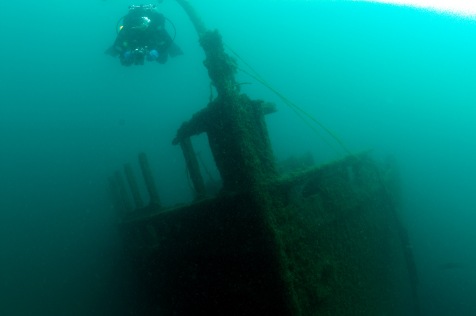 98 years ago today, a 296 foot long steamer sunk near Thunder Bay Island on Lake Huron. Today the Grecian sits in about 100 feet of water. Unfortunately, this was the second time the ship had sunk. The first was in the St. Mary’s River after it hit a rock. It was then refloated… only to sink again where it sits today. A salvage was attempted in 1909 with little success; in fact, machinery from attempt remains on the vessel’s stern.

The midships portion of the wreck is collapsing today, but the bow and stern are still intact. This is a popular wreck for divers because the Grecian remains upright with its engine, boiler and deck machinery all still in place.

Visit http://thunderbay.noaa.gov/shipwrecks/grecian.html  for more details on this shipwreck and many more!

Field School Friday will be a weekly feature on the MAS Thunder Bay blog. We will feature field schools from around the world to help promote archaeology programs and present students with more educational options.

As this blog posts, the Northern Michigan University archaeological field school will be wrapping up. This summer, from May 18-June 24, students spent time on Beaver Island, excavating the Isle de Castor Site. This location was has both historic and prehistoric activity, including the site of a Late Woodland camp.

During this field school, students will have learned field and lab methods, including how to do shovel test pits and artifact analysis. This particular field school is geared towards those that desire a career in cultural resource management (CRM).

We’d love to hear from some of the students that took this course this summer! Email as us MASThunderBay@gmail.com to let us know how your experience was! For more information on the Northern Michigan University archaeological field school, visit http://www.nmu.edu/sociologyandsocialwork/node/51.

More than 120 feet under the waters of Lake Huron, there is a raised ridge that stretches from Alpena, Michigan to southern Ontario. Though it is underwater now, almost 10,000 years ago during the last ice age,  it would have been exposed. An outcropping of limestone and dolomite would have created two separate lakes instead of the one continuous Lake Huron we know today. Historical sailors and maritime men knew of this ridge but instead called it the Six Fathom Shoal. Today, it has been named the Alpena-Amberley Ridge by researchers.

Bathymetric map of Lake Huron that shows the Alpena-Amberley Ridge.

The latest research from the University of Michigan’s John O’Shea claims that the Ridge is also an ancient hunting site. He hypothesizes that this strip of land would have been a migration path for caribou which prehistoric hunters took advantage of. Without question, there is more exciting research to be done on the Alpena-Amberley Ridge.

The Michigan Archaeological Society is a long-standing organization whose primary goal to educate the public on the importance of cultural resources in order to protect them from destruction. All who are interested in helping us achieve this goal are welcome in MAS. No professional experience or education level is required.

The Thunder Bay chapter of MAS reports on and involves itself with archaeologists and history lovers of Northern Michigan. It strives to include information on every aspect of archaeology, both on land and underwater.

The Thunder Bay chapter of MAS is seeking submissions to its blog, www.MASThunderBay.wordpress.com. Students, avocational archaeologists, professionals and professors alike are invited to submit recollections from the field, short book reviews, reports on Michigan archaeology, case studies or announcements relevant to the field. We also welcome tales from the museum, be it stories of artifacts or exhibits.

Generally, submissions should be shorter than an academic article; it should also be understood that blog entries are to be written for a wider audience. Academic articles should be submitted to the Michigan Archaeological Society’s publication, the Michigan Archaeologist. Authors are not required to be members of MAS, but membership is strongly encouraged. Please visit www.miarch.org/join.html for more information on membership.

“Naub-cow-zo-win” is derived an Obijwa-Ottawa word that means charms of personal significance and this large collection of shale discs were aptly named. They have been discovered in four Late Woodland sites along the Thunder Bay River in Alpena County, Michigan. The authors of “Naub-cow-zo-win Discs from Northern Michigan”, Charles E. Cleland, Richard D. Clute and Robert E. Haltiner, have suggested that this is because they were manufactured and used for only a short time and for a specific purpose.

These discs were originally part of the Haltiner Collection but when they were studied by Cleland, he noticed a striking similarity between  the symbols on the discs and those on the Mide-wi-win birch bark scrolls and Canadian rock art. Richard Clute, archaeology professor at Alpena Community College, began a more in-depth study of the discs in 1980. Clute’s Hampsher site has recovered over 100 shale discs that have been added to the 130+ that were discovered by the Haltiners.

The Hampsher site (20 AL 44) produced many other artifacts. Chert points, pottery, a scraper, celts along with the discs were recovered as of the publication time of this article. There is also archaeological evidence of hearths, post molds and small pits. It has been described as a small village occupied sometime between 1250-1400 CE.

The discs themselves are of Devonian limestone. The authors hypothesize that the discs were manufactured at the Hampsher site as discs were discovered in all stages of manufacture. About half of the discs present some sort of decoration. Most identifiable designs are attributed to Algonquin mythology. Prominently featured is Me-she-pe-shiw, a malevolent mountain lion that lived under the waters of the Great Lakes and caused storms with his great tail. Thunderbirds, a moose, a beaver and otters are also represented.

Knowing the function of these discs is near impossible. But the authors claim there are clues. One possibility is that the charms were used for protection against the treacherous waters of Thunder Bay. Could it be that even hundreds of years ago, Thunder Bay was thought to be a mythical and dangerous place?

This was a short summary of the article published in 1984 by Charles E. Cleland, Richard D. Clute and Robert E. Haltiner in the Midcontinental Journal of Archaeology .  To view the Naub-Cow-Zo-Win Discs today and learn more about Native American activity in Michigan, visit the Besser Museum in Alpena, Michigan.